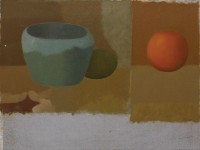 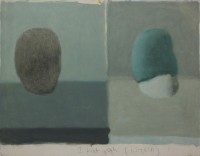 What makes a great magician? According to Novalis, the best magician is the one who can view his own enchantments as “autonomous phenomena created by others,” one that is also able to enchant himself.

Komet realizes this at the MARS Architectural Research Studio. At his exhibition, “Realizing Without Realization,” he comes pretty close to this impossible definition of a magician.

Before we proceed to explaining why it is enchanting to see an artist, who may say “these have nothing to do with me” referring to even his “self works” (when he doesn’t find them adequately successful), may own up to practices made by somebody else, let us take a brief look at the extraordinary story of the exhibition: Paris-based caricaturist Sinan B?çakç? practiced with oil in a variety of still-life works with a view to sustaining his livelihood. Years later, the practices that remained from this learning process were given to Komet by Biçakçi’s daughter. Some of these practices bore amazing similarities with the works, which were called by Komet as “altomodern” in the 2000s where he sought the “impertinence of the ultra-controlled relations of form.” (Biçakçi and Komet met at a parallel moment as the former strived to advance forward, towards competence while the latter moved backward, towards the first hand/primitive.) Finally, “found Komets” came and found Komet, and our artist decided to open a “Komet exhibition” with works by Biçakçi he selected among hundreds of practices.

This exhibition differentiated itself from ordinary, original “Komet exhibitions” not only with its composition that featured “adopted works” that were later owned and incorporated, but also in its being a “Doppelgaenger” (double) exhibition. This hard to believe encounter reminded us of the stories by Kafka or Borges: Which one was the reflection of the other; what would be the fate of the paintings that found their doubles?... As in most Doppelgaenger stories, here, too, the state of uniqueness (matchlessness) came to an end; faced with this situation, in addition to astonishment, we also feel a certain shiver. We wonder about the most probable “fear of no longer being oneself” in the paintings of Komet (in Komet the painter, too).

Rather than ignoring these practices on the ground of the differences in composition, technique, and intent, Komet preferred to create an ambivalent, ultimately risky situation, and to directly (openly) face uncertainty. He has created a highly atypical state of “appropriation.”

We can surely interpret the exhibition over these “appropriation” debates (texts by R. Krauss, N. Bourriaud, in particular). Here, one can speak of both a destruction attempt against the “modernist myth of originality,” singular-multiple duality and a “post-production” action aimed at sharing… Komet, who has had “interests that tripped the ideal of autonomous aesthetics” all along (phrase coined by O. Koçak), in a sense proceeds to the state of self-reproduction without being self.

What separates the exhibition “Realizing Without Realization” from any appropriation is that it is a self-appropriation that almost comes to self-destruction.

Perhaps, from this perspective, we should view the exhibition as a ‘typical’ case of “auto-immunity.” Derrida may be right after all: In order to reestablish itself as a unique living ego, the ego forms immune defenses against its adversary, its opposite. However, it directs these both for and against itself. It perceives the tissues in its own body as outsiders, and starts to attack itself.

The self-immunity nuisance, which shakes the inside-outside distinction (part of life’s rich tapestry), also introduces a dramatic dimension to Komet’s “altomodern” (in this exhibition). This exhibition is how a good magician astonishes us as he exhibits his own astonishment before everything else. It is the clouding of the clarity of the ego, hindering of its complacency, its demonstration of an attitude that destroys all attitudes. It is how it makes us watch the way it enchantes itself. As Komet says in one of his poems: “…this is the fault of truth / it is not blameless / it is always as if revisited (reappeared) / with a baby porcupine / lying down on its hand / we tackle ourselves.”